In my posts on real-life examples of French conversation and in the post on how to use these examples, I’ve insisted on the importance of the very common subject pronoun “on.” It is also used often in advertising, as in Fig. 1, to add an informal touch to the message. 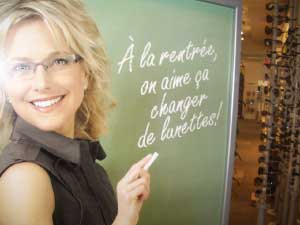 Because the teaching of French is generally biased towards the written language, the use of “on” for speaking is not often studied in detail. In fact, if you look at conjugation tables in most reference works, you will rarely see mention of “on.” Here, for example, is a typical table for the present indicative tense of the verb “être” (to be) with the various subject pronouns (je, tu, il, elle, etc.).

Every student of French has learned this sort of table by heart. Not a bad idea, but this table is quite misleading. It does not contain the 3rd person singular form “On est” and it does not indicate that “On est” has a very unique property: it can replace all the other forms.

Why “on” is awesome and essential for French conversation

The indefinite uses of “on”

In both the spoken and written language a common use is the equivalent of the English pronoun “one.” For example:

On peut tout trouver dans cette ville. (One can find everything in this city.)

Since “one” is often considered old-fashioned or stilted in modern English, a lot of times “you”, “people” and “someone” are used instead. As in:

On peut voir la cathédrale Notre Dame à droite.
You can see the Notre Dame cathedral on your right.

En France on aime bien manger.
In France people like to eat well. 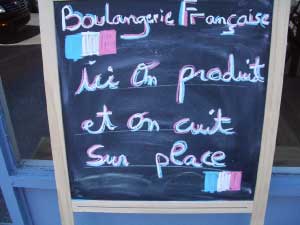 In these cases, the speaker is generally an observer and is not included in the subject, as in:

On frappe à la porte.
Someone’s at the door.

In Fig 2, the use of “on” is a somewhat ambivalent. It could be indefinite, as we discuss here, or it could be a replacement of “nous” that we look at below

There is an absolutely delightful idiom “on ne peut plus” (literally: one cannot more) that means “extremely” as in:

Elle était on ne peut plus contente. (She was extremely happy.)

Use of “on” for the passive voice

This indefinite use of “on” is often used to express a meaning that in English often requires a passive form. Here are some examples:

On m’a dit de venir. (I was told to come.)
On m’a donné un cadeau (I was given a gift.)
On a trouvé un sac à main (A handbag was found.)
Ici on parle beaucoup de langues (Many languages are spoken here.)
On m’a posé beaucoup de questions, (People asked me lots of questions.)

Replacing the other subject pronouns in French conversation

In spoken French, especially fast informal language, users tend to use the simpler conjugation forms over and over again. What if you could use just one form subject pronoun and verb form in place of all the others?

Well, it’s not that simple. You couldn’t really have an entire conversation with “on” instead of “je, tu, il, etc.” But as you will see, that little “on” can do a lot.

In spoken French, the number one use of “on” is to replace the subject pronoun “nous” and the complicated verb forms. Every real-life example of French conversation in this blog contains many examples of this use. In fact, in colloquial French the “nous” verb forms have nearly completely disappeared. Here are some examples:

On est contents de vous voir. (We’re happy to see you)
On est en train d’évaluer la situation. (We are assessing the situation.)
Nous, on demande une augmentation modeste. (We are asking for a modest raise)
On pensait vous appeler hier. (We were thinking of calling you yesterday.)
On va y revenir. (We’ll come back to this.)

In Fig. 3, notice how well put is the message, “We will be seeing each other more often.” 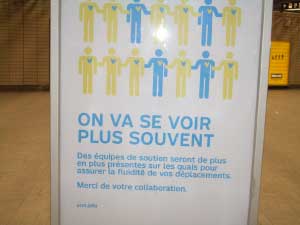 This is often used in questions. In a restaurant, the waiter could say:

(Notice in passing that we have written “prêts à commander” with “prêts” in plural form because the real subject is plural.  Generally speaking, where applicable, one should make the agreements with the real subject and not just with “on.”)

This use for “you’ is very common when giving instructions or orders.

This is the meaning in the Fig. 4.

Use of “on” to replace “je, il, elle, ils, elles” is not as common but certainly possible. In these cases there can be a touch of irony or formality. You could certainly say something like:

How do you know which meaning is being used?

Because this “on” is so flexible and can mean so many different things, how do you know which is which? In many of the examples given above, the translations  could have used other pronouns. The only way to determine the meaning is to look at the context.

Here is a great sentence with some possible translations:

All three translations are equally valid, The context will tell which one is appropriate. That said, the most likely meaning is the first one because in French conversation “on” is used mostly to replace “nous.”

Stanley Aléong is a polyglot, author, musician and language coach in French, English and Spanish. He likes to share his passion for languages and believes that anybody can learn to speak a foreign language well with the right methods and tools. He has also invented a cool visual learning tool called the Language Wall Chart Calendar that is based on his own learning experience. Reach him at info@langcal.com.