In a previous blog post, I looked at a potential source of confusion when learning how to use grammatical gender in French. We looked at the complexities surrounding masculine nouns that start with a vowel or a silent h. In this post I want to look at something similar with feminine nouns but on a much smaller scale.

We’ll be looking at feminine nouns that begin with a vowel or a silent h. Words like image, âme, expérience, université, étoile, heure, habitude, horreur. And just like with their masculine counterparts, the complication lies in the adjectives that precede these words. But unlike the case of masculine nouns, here the complication is with possessive adjectives.

In English, the possessive adjectives are very simple and invariable: my, his / her /its, our, your, their. In French, they are obviously more complicated because of grammatical gender. Thus we have a set for masculine singular nouns, a set for feminine singular nouns and a set for plural nouns of either gender, as follows:

I’m sure readers are aware of the importance of the ton – votre, ta – votre and tes – vos distinction between the informal – formal and singular – plural forms of ‘your’.

Note that the gender distinction is only apparent in the singular forms mon/ma, ton/ta and son/sa. There is no grammatical gender information in the other forms, and we won’t discuss them.

At this point I should point out that in ‘his/her’ English traditionally makes the gender distinction according to the possessor. I bring this up because some beginner English-speaking learners of French get confused and think that son means ‘his’ and sa ‘her’. This of course leads to disastrous results like *son soeur for ‘his sister’ and *sa frère for ‘her brother’.

Possessive adjectives and feminine nouns starting with a vowel

The problem at hand has to do with the use of ma, ta and sa in front of feminine nouns starting with a vowel or silent h. What happens of course is that rules of liaison or phonetic harmony – l’euphonie in French – dictate that the masculine forms mon, ton, son should be used in front of these feminine words. So, instead of attempting to say *ma image, *ta expérience or *sa habitude, one should say: mon image, ton expérience and son habitude.

A detailed look at the use of idéé.

Here is a series of examples using the feminine noun l’idée ‘the idea’. The first two examples do not use possessive adjectives:

But ‘my idea’ cannot be *ma idée because this does not sound good. It becomes mon idée so that the mon can blend with idée. So we have examples like:

Example (4) illustrates nicely how the masculine possessive adjective coexists with all the markers of the feminine gender of idée.

Here are various examples including some nouns starting with silent h: 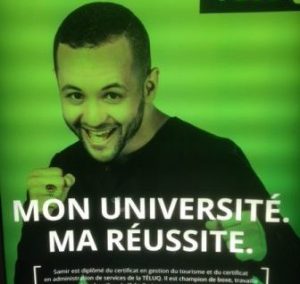 Example (12) was taken from an advertisement for a university as you can see in the picture.

Conclusion: think sound and think ahead

I’ll admit that all this looks complicated and it is. But mastering it is really not that difficult. The key here is to think in terms of sound. All these little complications exist because of the need to make the articulation of connected speech easier. So, once you start to speak fluently, things tend to fall naturally into place because they just sound right.

Remember that a lot of times the spoken language is much simpler than the written form. What may be written three different ways can sound the same, and keep in mind that in French a lot of letters are not even pronounced.

Because this whole business of grammatical gender is probably the biggest problem for speakers of English learning French, mastering the subtleties makes all the difference between speaking good French and great French. The question is: how do you get there?

Identifying the right gender of a noun is just the beginning. The real challenge is all the bits and pieces that are linked to the noun. So, once you’ve locked in on the key noun, you must look at the related words that come before and after to see how they must be modified in terms of gender agreement. This has to be done on the fly of course. If you have to stop often to think about gender, you will not speak fluently and you’ll draw attention to your many mistakes.

My advice to students is pretty much always the same, a combination of: analytic listening to real usage, repeated articulation of good examples that highlight and contrast the point of grammar, and deliberate use in lots of actual conversations. Here are some typical examples using both masculine and feminine nouns:

And here is a sophisticated example using a bit of everything discussed in the last two blog posts: