How much grammar do you need to study to speak French well? The question is difficult to answer because you have to make the distinction between acquiring and studying. Speaking impeccable French requires a good grasp of grammar.  How to go about acquiring this and how much formal study is necessary is highly debatable.

Regular visitors to this site know that I strongly believe in learning by examples.  Although most of my posts are on points of grammar, I always approach them through a wealth of examples. This is the fundamental logic behind my series of posts on real-life examples of French conversation.

It is important to make the distinction between spoken French and written French. I’ll be the first to admit that written French can be complicated and difficult to master. But my observation in a variety of languages is that the spoken language is always quite simple and straightforward because people generally do not like complex grammatical constructions.

My approach to French grammar is a five-step process:

Step 1: Master the basics – the most common forms.
Step 2: Pay special attention to the known problem areas.
Step 3: Watch out for interference from one’s native language.
Step 4: Train the ear with many authentic examples to decode unscripted speech.
Step 5: Have a look at the formal or literary uses. 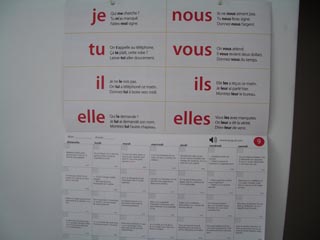 Let’s see how all this works with a very important aspect of French grammar: direct and indirect object personal pronouns. I have devoted a page to it in my Essential French language calendar learning tool.

Step 1: Mastering the basics of object pronouns in French.

On the bus the other day, I overheard a very angry young woman on the telephone say to her soon-to-be-history boyfriend:

I wondered what the young man had done to deserve such treatment. I also marvelled at this perfect example of the use of direct and indirect object personal pronoun “te” in French. (Notice that in casual spoken French the “ne” of the negation “ne…pas” has disappeared.)

Personal pronouns are those little words that can substitute for nouns or persons. All readers here have certainly learned the French subject personal pronoun je, tu, il/elle/on, nous, vous, ils/elles that are used to conjugate verbs, e,g, je parle français.

Here are a couple of examples:

As-tu vu Adèle ? Nous la cherchons. (Have you seen Adèle? We are looking for her.)
Je vous remercie infiniment. (I thank you very much.)

A very important rule to remember here is that in French the object pronoun always goes to the left of the verb that it is associated with. In English the pronoun goes to the right.

The pronouns le, la and se become l’ and s’ in front of verbs starting with a vowel.

Here are the indirect object pronouns in French:

The indirect object forms would be used with verbs like: parler, dire, expliquer, paraître, sembler, offrir, donner, etc. Note that these verbs will use the preposition à when used with a noun instead of a pronoun, e.g. Je parle à Pierre (I’m speaking to Pierre.)

Here are some examples:

Elle m’a tout dit. (She told me everything.)
Ils lui ont expliqué le problème. (They explained the problem to him.)

Much of this should be familiar to readers here. Notice that the direct and indirect pronouns are identical except for the third person indirect pronouns that become lui and leur. As we will see, this is where the complications arise.

To see how this all works, we’ll revisit that example overheard on the bus. Let’s imagine that the young lady is talking to a friend about that ex-boyfriend. Here is what she would say:

Now let’s change roles and have a male speaker talking about an ex-girlfriend.

In the next example, the speaker uses the vous pronoun form when speaking to a group of persons:

Finally, let’s look at a situation where the speaker is talking about some other people and says:

In example (5), we could have used “Elles” when referring to a group of women. All the other pronouns would remain the same.

This is basically the entire system minus a few little details. It’s quite simple.  Most of the direct and indirect pronouns are identical and all go to the left of the associated verb. With the information in these examples alone you could function quite well.

But things can get a bit tricky and trip up the unsuspecting learner.  This is when we go to Step 2 that I’ll address in the next post.

Stanley Aléong is a polyglot, author, musician and language coach in French, English and Spanish. He likes to share his passion for languages and believes that anybody can learn to speak a foreign language well with the right methods and tools. He has also invented a cool visual learning tool called the Language Wall Chart Calendar that is based on his own learning experience. Reach him at info@langcal.com.